Pivot Arts and Loyola University’s Department of Fine and Performing Arts continue their partnership with a unique Performing Arts Incubator Program for professional artists, which includes mentorships for Loyola undergraduates.

The program provides companies, and/or ensembles of artists and collaborators, time and space to develop contemporary performance that often blurs the boundaries between music, dance, theater and other disciplines. Projects are often devised works, scripts-in-progress, dance/theater works and range from the gem of an idea to a nearly completed work that needs more time in development.

Incubator projects have gone on to premiere in the Pivot Arts Festival as well as at major regional theaters including Isaac Gomez’s La Ruta at Steppenwolf Theatre and Rude Mechs’ Not Every Mountain at the Guthrie.

Samples of Past Incubator Events 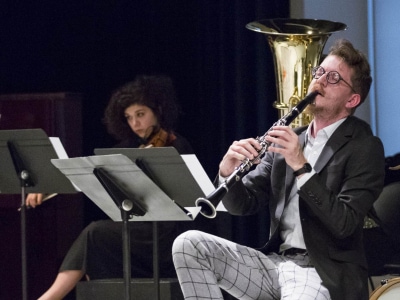 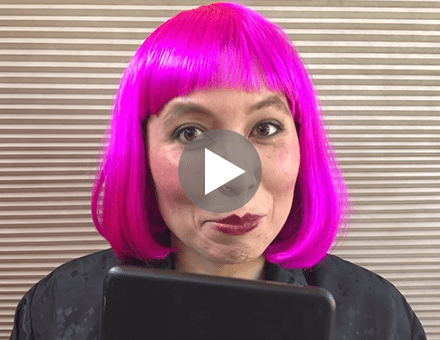 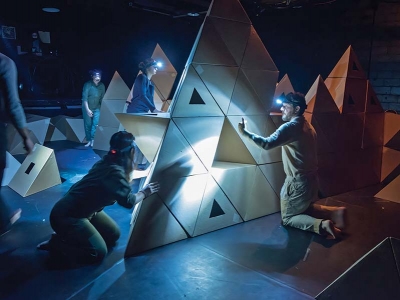 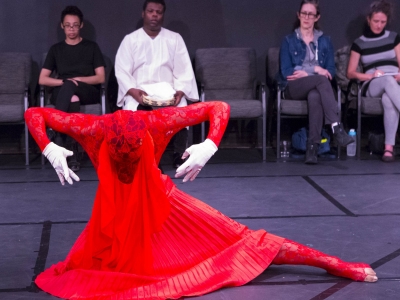 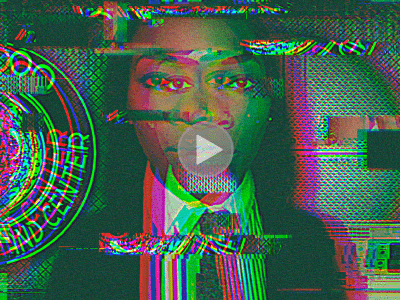 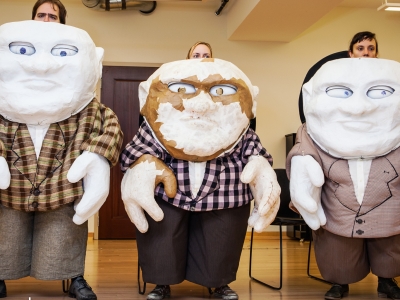 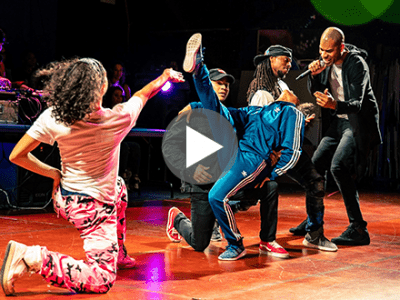 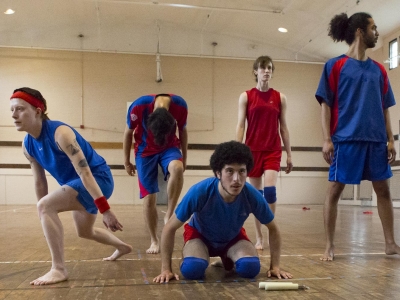 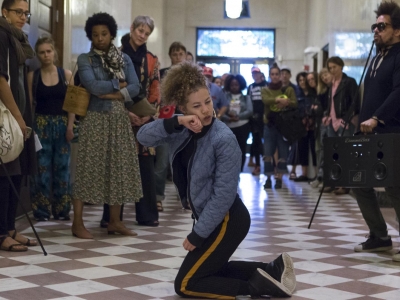 Seth Bockley (Director) and Drew Paryzer (Playwright) will develop SUPERFLUXUS, an audience-interactive piece that includes a combination of puzzles, performances and installation, guiding spectators through an epic consciousness-bending adventure. The project builds on contemporary audiences’ appetites for immersive performance and puzzle and adds narrative sophistication, strong scripted performances, media design and a sense of event and celebration.

Silencio, a site-specific theatre company in Chicago, will develop a new work, THE TREATMENT, a live-cinema version of Martin Crimp’s under-produced classic. To capture Crimp’s nightmarish hall-of-mirrors vision of storytelling and moviemaking, the entire production will use live video.

Mandala South Asian Performing Arts will develop their new work beaten path, a jazz suite written for cultural dance that draws from Carnatic and jazz melodic and rhythmic sequences. The production features dance and musical artists reflecting on journeys of mental health within family contexts. The movement is rooted in cultural traditions from Chicago, South Asia and beyond and is steeped in improvisation.

Aaliyah Christina/Catalyst Movmnt will develop their new work, I’M FULL OF B.S.: AN AUTOBIOGRAPHY, which acts as a process of remembering major life events and small instances of the past. The work will serve as an exploration and anthology of black depression struggling against the stigmas of mental health and therapy in the black South, including stories of black single motherhood and the effect of absent father figures.

Jumble of Bones by Jenni Lamb uses movement and puppetry to explore the ways in which we are all bound together. Jenni is a Chicago-based playwright. She is a Resident Playwright at Chicago Dramatists, was in the Playwright’s Unit at the Goodman Theatre and has had her work produced locally and nationally. She holds an MFA in Writing for the Screen and Stage from Northwestern University.

Courtney Mackedanz is a choreographer, dancer and performance artist developing a new work about the bonds between a group of friends. She earned a BFA in Performance and Visual Critical Studies from the School of the Art Institute of Chicago in 2013. Since then, Mackedanz has presented her work in Chicago, New York, Montreal, & Shanghai.

Ethan Parcell’s compositions have been performed throughout the US and Canada by Boston Musica Viva, the Elgin Youth Symphony Orchestra (where he is their first ever composer-in-residence), and various others. He received his BM in Composition from the Boston Conservatory. His piece, A Pleasant Come Across or A Dozen-or-so New Rags was a collection of new revisionist ragtime compositions, performed by a nine-person instrumental ensemble with a cartoonish commitment to silent-film slapstick and circus antics.

Po’Chop | Jenn Freeman project, The People’s Church of the G.H.E.T.T.O (Greatest History Ever Told To Our People), is a multi-disciplinary (dance, poetry and music) project that creates spaces to learn, edify and worship the legacies of black women. This is a church that is rooted in the life and work of Audre Lorde and is currently focused on unearthing the legacies of black women in Chicago’s Bronzeville.

The Rude Mechs are a nationally-known theater company from Austin, Texas. They have received over 180 local and national awards and nominations for their work and have had four Off-Broadway premieres and toured to top national venues. Their piece NOT EVERY MOUNTAIN will perform in the Pivot Arts Festival and then perform at the Guthrie Theater in Minneapolis after its Chicago premiere.

Chicago Fringe Opera and BraveSoul Movement will develop a new piece THE ROSSINI PROJECT, a music- and movement-based adaptation of Rossini’s opera ‘The Barber of Seville’, using opera singers, rappers, hip-hop breakdancers and DJs to remix a story of interracial love as a live dance party.

Anna Martine Whitehead will develop NOTES ON TERRITORY, a solo movement performance within the frame of a PowerPoint presentation. Using video, sound installation, text and language-play, in addition to set choreography and improvised movement, NOTES ON TERRITORY makes connections between gothic cathedrals, colonial fortresses, U.S. public housing, and prisons. Martine has performed across the country including venues in New York, San Francisco, Chicago.

Shannon Stewart and Aurora Nealand will develop HYSTERIA AND THE BODY which seeks to deepen their ongoing artistic collaboration, creating a new performance piece grounded in live music, dance/movement, and visual media (video projection & photography). This movement opera will focus ton the concepts (and realities) of gendered movement, gendered sound and media messaging in contemporary American culture. Stewart has performed nationally and internationally and is based in New Orleans. Nealand studied at Oberlin’s Music Conservatory, in Paris with Jacques Lecoq, and is a New Orleans music artist who performs nationally.

Playwright and Literary Manager of Victory Gardens, Isaac Gomez, who developed a script that integrates traditional Mexican music as a core storytelling component. Entitled, THE WOMEN OF JUAREZ, this ethnographic piece focuses on the mass murder of women in the Ciudad Juarez, Mexico, using testimonials of real women from the city, resulting in a multidisciplinary work that challenges the boundaries of traditional storytelling. (Premiering as La Ruta at Steppenwolf Theatre Company).

terraNOVA Collective developed DON CHIPOTLE, a multi-medium play written by award winning playwright and performer Juan Villa. Inspired by the classic tale Don Quixote and Villa’s own experience growing up in the violent atmosphere of lower East Side Manhattan, DON CHIPOTLE uses puppetry, music, song and dialogue to create a magical adventure about an uninhibited child who has his childhood taken away.

Laboratory for the Development of Substitute Materials (LDSM) worked on  STRUCTURAL REMAINS: A MEMORY EXPERIMENT, a devised piece based on abandoned buildings and the memories that remain. LDSM is a devised theatre collective consisting of Seth Bockley, Rachel Claff, Chloe Johnston, Ira S. Murfin, Kerensa Peterson, Angela Tillges and Seth Zurer. They seek to make collectively devised, research-based work that explores issues arising from scientific research and the built environment using the tools and techniques of theatre.

Vanessa Valliere combines puppetry and dance and created NICE TRY, an interactive clown show based around the idea of an impaired performer that subsequently played as part of the 2015 Pivot Arts Festival. Amidst an adventure of dolls, a burlesque show and mashed potatoes, Valliere’s well-meaning clown aims to please… and her utterly unique failure inevitably delights the audience. Valliere is a performer, clown, and proud nerd-cheerleader for Chicago’s own thirty-piece marching band, Mucca Pazza.

Playright and rock journalist, Mark Guarino teams up with rocker and founder of the British band, the Mekons, Jon Langford to create a new musical about a man with an ailing wife who convinces the city of Roswell, NM to build an alien theme park.

Dog & Pony Theatre Co. explores the relationship between Richard Wagner and Ludwig II in a new play about art, money and lust.

Ruth Margraff, playwright and musician develops her working-class, world folk opera THREE GRACES based in “emotional vibrato” –a technique that explores the boundaries between speaking and singing.